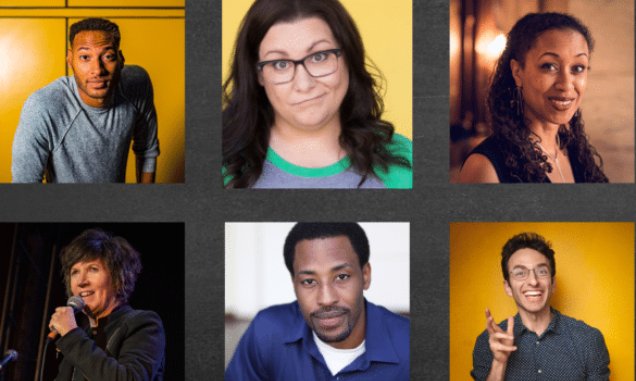 See six comedians at each showcase who have been pre-selected for their unique ability to bring laughs without vulgarity. Don’t miss this festival favorite!

LeClerc Andre is quickly building a name for himself. His quick wit and charm can be seen dazzling clubs and colleges across the country. LeClerc was featured last year at Just For Laughs Comedy Festival as one of the New Faces of Comedy which quickly spring-boarded him into his TV network debut on The Tonight Show with Jimmy Fallon as well as on NBC’s “Bring the Funny.”.

Jessi Campbell is likeable, smart, witty, and most of all….Hilarious! She was the 2015 Campus Activities Magazine Female Performer of the Year, and has performed at over 1,000 colleges Nationwide. Jessi’s comedy CD “Winner Winner” has been featured on iTunes and can be heard on Sirius/XM Radio, Pandora/Spotify, and terrestrial radio stations

Dr. Leighann Lord is a veteran stand-up comedian and the author of Dict Jokes and Real Women Do It Standing Up. She is the creator of the People with Parents podcast and has been a co-host on StarTalkRadio, with Neil de Grasse Tyson. She has been seen on Comedy Central, HBO, and The View, and was recently seen on Netflix in theDef Comedy Jam25th Anniversary Special. Leighann is a proud member of House Ravenclaw (with a dash of Slytherin).

A regular at Comedy Works since 1992, Nancy Norton is often called a Denver comedy legend. You may have seen Nancy’s Dry Bar Special, “Super Dork” or Amazon Prime Video’s “Evening at the Improv” previously on A & E, Nickmom Night Out on Nickelodeon, and in her one-woman show, “The Yellowish-Green Girl” on PBS.

Brooklyn native Dwayne Perkins is a vet in the comedy game. His one hour comedy special: “Dwayne Perkins: Take Note” debuted on Netflix to rave reviews and instantly became a fan favorite. Dwayne has also made several appearances on Comedy Central, CONAN and the Jay Leno Show. Dwayne is also the author of the book, “Hot Chocolate For The Mind,” A collection of humorous essays.

COVID Safety Protocols are in affect for all Gilda’s LaughFest events. Upon admittance to the host venue, all Attendees and any Accompanying Parties will be required to present one of the following: