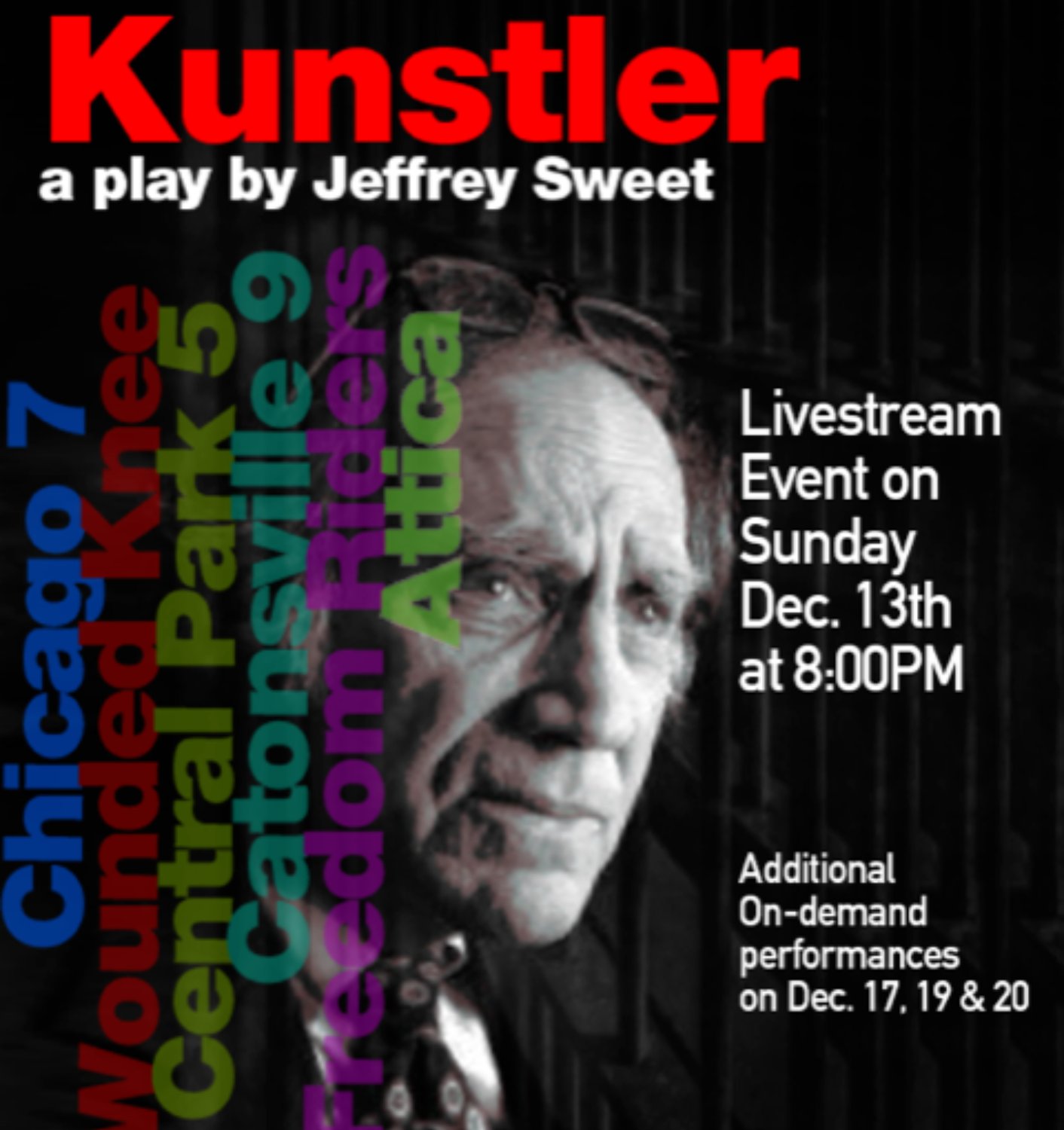 SPECIAL LIVE PERFORMANCE - ONE NIGHT ONLY

Sunday, December 13, 2020 at 8:00 p.m. The play will be performed live at Wealthy Theatre where a small studio audience will watch as the play is video streamed and recorded.

Thursday, Dec. 17, Saturday, Dec. 19, and Sunday, Dec. 20 A recorded version of the performance will be available on demand all day on these 3 days.

THE STORY BEHIND THE PLAY:

Kunstler follows a day in the life of the late American-Jewish radical lawyer and civil rights activist William Kunstler as he arrives at a college campus to give a seminar. Well known for his politically unpopular clients, and famous for defending the Chicago Seven, Attica prison rioters, and American Indian Movement, Kunstler's notorious career is met with an unwelcoming crowd. African-American law student Kerry Nicholas is assigned to introduce him despite being the member of the school’s speaker program who strongly objected to his appearance. Kunstler energetically recounts his controversial cases as Kerry struggles with the urge to challenge him publicly.

“Along with being admirable theater, a stirring history lesson, and a vivid character portrait, Kunstler, Jeffrey Sweet’s galvanizing play is sure to inspire budding lawyers.” – The Journal News

"KUNSTLER excels at every level, bringing alive not only a famous character, but the era in which he lived and the controversies in which he played so lively a part." - Front Row Center

…a compelling portrayal of the high profile trial lawyer…This fascinating [play] provides a unique insight into Kunstler’s life and times…Regardless of your opinion of William Kunstler, you will find KUNSTLER to be a captivating and entertaining show.” — BroadwayWorld.com.

“A well-crafted and smartly organized script that’s infused with generous dollops of humor…Sweet’s vivid integration of so many…historic events is remarkable—especially the vivid recollections of the infamous Attica prison riots…” — CurtainUp.com.

“KUNSTLER excels at every level, bringing alive not only a famous character, but the era in which he lived and the controversies in which he played so lively a part…It is a fitting compliment to KUNSTLER to say that Kunstler, the theatrical iconoclast, would approve. So will you.” — TheFrontRowCenter.com.

“…Sweet offers up a clever script exposing a fascinating behind-the-scenes account of what really went down during [Kunstler’s] high profile cases…This is a captivating and powerful theatrical event that will leave you cheering.” — StageBuddy.com.