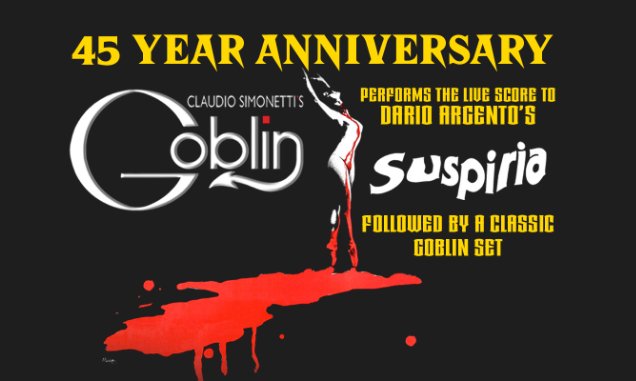 Composer Claudio Simonetti has written and recorded some of the most influential soundtracks in horror, including Dawn of the Dead, Demons, Deep Red, Tenebre, and countless others, with his seminal work still informing the genre to this day. This year, Simonetti's Goblin celebrates the 45th Anniversary of Dario Argento's iconic picture, Suspiria, with a live performance of the score set to a screening of the film. Following the finale of the cult classic, the collective will return after a brief intermission to deliver a set of quintessential Goblin material alongside clips from the songs’ cinematic counterparts.

Suzy (Jessica Harper) travels to Germany to attend ballet school. When she arrives, late on a stormy night, no one lets her in, and she sees Pat (Eva Axén), another student, fleeing from the school. When Pat reaches her apartment, she is murdered. The next day, Suzy is admitted to her new school, but has a difficult time settling in. She hears noises, and often feels ill. As more people die, Suzy uncovers the terrifying secret history of the place.