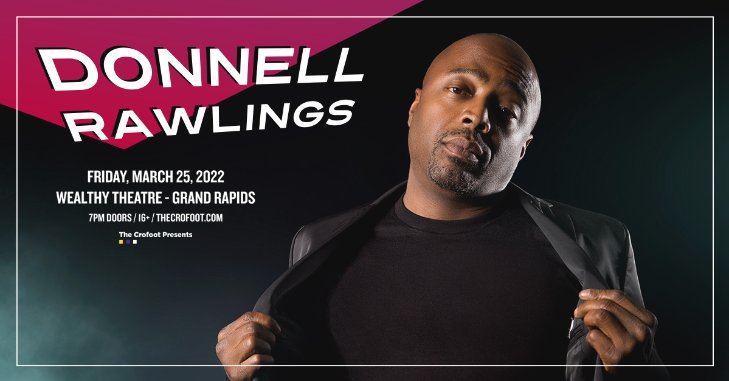 "Due to unforeseen circumstances, the Donnell Rawlings show on Friday, March 25, 2022 at the Wealthy Theatre in Grand Rapids has been cancelled. Refunds will be available at their point of purchase. We apologize to anyone who was looking forward to the show. Donnell will be back in Grand Rapids soon!" - The Crofoot

Donnell Rawlings is an overnight success a decade in the making. You’ve seen him on Comedy Central’s award winning and critically celebrated “Chappelle’s Show” as “Ashy Larry,” the 70’s jheri curled “Beautiful,” and numerous other characters he’s played. Donnell is the franchise player Dave Chappelle and Neal Brennan wanted as a writer and prime time player on their team. “Hilarious” is what Linda Stasi of The New York Post calls Donnell. In recent years Donnell was on numerous seasons of MTV2’s “Guy Code and served as the judge of MTV2’s Guy Court. Donnell has been recently cast in Kevin Smith’s project Hollyweed. Donnell continues to tour the world with his hilarious standup. He also lends his voice to Black Jesus and Black Dynamite.