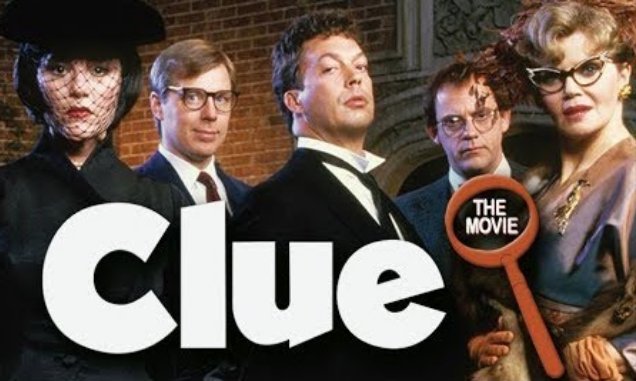 Based on the popular board game, this 1985 cult comedy classic begins at a dinner party hosted by Mr. Boddy, where he admits to blackmailing his visitors. These guests, who have aliases, are: Mrs. Peacock (Eileen Brennan), Miss Scarlet (Lesley Ann Warren), Mr. Green (Michael McKean), professor Plum (Christopher Lloyd), Mrs. White (Madeline Kahn) and Col. Mustard (Martin Mull). When Boddy turns up murdered, all are suspects, and together they try to figure out who is the killer.

Paired with the book: The 7 1/2 Deaths of Evelyn Hardcastle by Stuart Turton. The Rules of Blackheath: Evelyn Hardcastle will be murdered at 11:00 p.m. There are eight days, and eight witnesses for you to inhabit. We will only let you escape once you tell us the name of the killer. Understood? Then let's begin... Evelyn Hardcastle will die. Every day until Aiden Bishop can identify her killer and break the cycle. But every time the day begins again, Aiden wakes up in the body of a different guest. And some of his hosts are more helpful than others... The most inventive debut of the year twists together a mystery of such unexpected creativity it will leave readers guessing until the very last page. Available now on GRPL Shelves: https://grpl.bibliocommons.com/v2/record/S158C47046066