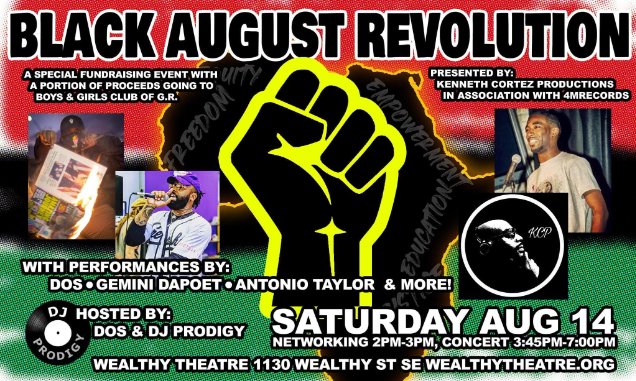 Join us at the historic Wealthy Theatre for a day of networking and celebration of Black Revolutionary action on August 14th! We will commemorate freedom fighters of old, and honor current leaders in the fight for Black Liberation in America. We are gathering to promote equity within our city and to empower our communities through networking and live performance.

This is a fundraising event that will benefit youth-centered programs such as the Boy's & Girl's Clubs of Grand Rapids, which will be receiving a portion of the proceeds. There will be a networking event in the lobby from 2pm-3:00pm where non-profits and community members will be able to make connections and sign up for family services.

This will be followed by the celebration inside the auditorium from 4pm-7pm! Revolutionary poets and community activists such as Antonio Taylor, Gemini DaPoet, Dos, and more will bring the energy of our ancestors to the stage to uplift and educate us on the true meaning of Black August.

Hosted by: Dos and DJ Prodigy