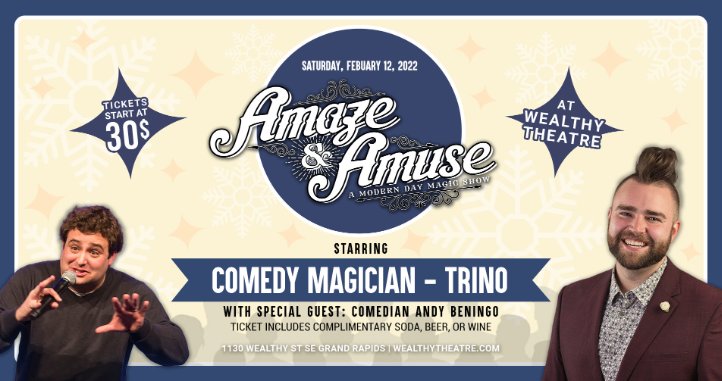 Amaze & Amuse is a modern day magic show that features comedy, mind blowing magic and lots of audience participation held in the 60 seat intimate Koning Micro Cinema at Wealthy Theatre. The show will feature comedy magician Trino and special guest comedian Andy Beningo. This show is the perfect date night and is recommended for ages 13+. Amaze & Amuse will begin at 7:30PM on Saturday, February 12th.

VIP Tickets are $40 and include 1 drink ticket, a deck of cards and guaranteed seating up front

Trino- Having grown up just an hour from "The Magic Capital of the World” (Colon, MI), Trino learned the art from top professionals that helped him quickly grow into a seasoned performer and entertainer. For 14 years (over half his life) Trino has loved bringing laughter, amazement, and high-quality entertainment to audiences of all ages. Now based in Grand Rapids, Michigan, you can find him entertaining at various events and traveling the country with his wife, Ashley, and their hairless cat, Cannoli. As seen on Fox, The Verge, CW Network, and ABC as well as a guest act on the Masters of Illusion tour, Trino is a versatile entertainer who has helped produce a variety of performances and events from packed-out college shows and corporate events to private soirées and company parties. Whether performing at a theme-park, university, Fortune 500 company, mega-church, or theatre, Trino captivates his audiences in a way that leaves them wonderfully entertained and elegantly enthralled. Thanks to his combination of skill and quick wit, Trino has been privileged to perform for celebrities such as Gene Simmons (KISS), Lee Brice (Billboard Chart Topping Country Artist), Kevin Nealon (SNL, Weeds) and many others.

Andy Beningo- With over 3,000 career performances, Andy Beningo has established himself as one of the most in demand comedians working today. Hailed for his clean and every man" style, Andy has been named one of the 40 Best Up and Coming comedians in the country, as well as "Best Comedian" by both the Detroit Metro Times and Detroit Hour magazine. Andy has appeared on AXS Gotham Comedy Live, CMTs Next Big Comic, and on Drybar Comedy Special, where his special 'Adorable Tough Guy' has generated over 5 million views on social media. He is a regular guest on the Bob and Tom radio show, as well as on XM Sirius radio. He has appeared on Larry the Cable Guy's "Weekly Round Up," and regularly tours with Frank Caliendo.