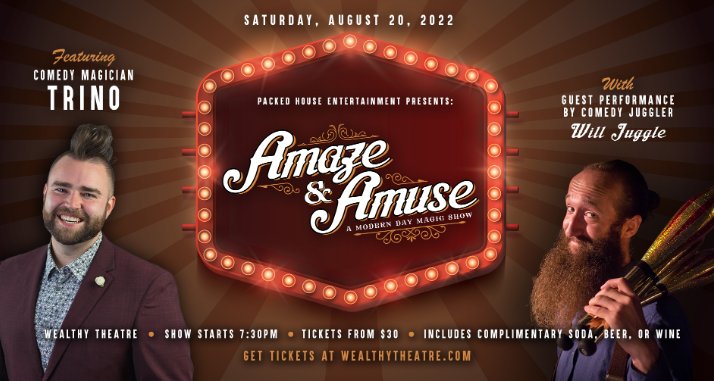 Amaze & Amuse is a modern day magic show that features comedy, mind blowing magic and lots of audience participation held in the 60 seat intimate Koning Micro Cinema at Wealthy Theatre. The show will feature comedy magician Trino with special guest Will Juggle. This show is recommended for ages 13+. Amaze & Amuse will begin at 7:30PM

Will Juggle- As a plucky schoolboy with a burning desire to entertain, Will began honing his performance skills. Tiring of his day job, by age 10, he began impressing crowds on nights and weekends as his mother chauffeured him around the suburbs of Chicago. He has since opened for the Presidents of the United States of America, charmed hordes of Harley riders, enchanted university students, and entertained at corporate events across the nation. His relentless devotion to his craft has left him with amazing skills and very few friends. You will laugh at his unique brand of humor, and become filled with awestruck wonderment at his champion juggling skills and award-winning beard.