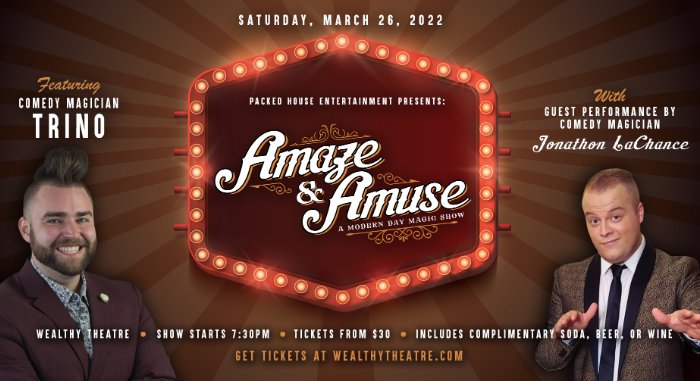 VIP Tickets are $40 and include 1 drink ticket, a deck of cards and guaranteed seating up front

Trino- Having grown up just an hour from "The Magic Capital of the World” (Colon, MI), Trino learned the art from top professionals that helped him quickly grow into a seasoned performer and entertainer. For 14 years (over half his life) Trino has loved bringing laughter, amazement, and high-quality entertainment to audiences of all ages. Now based in Grand Rapids, Michigan, you can find him entertaining at various events and traveling the country with his wife, Ashley, and their hairless cat, Cannoli. As seen on Fox, The Verge, CW Network, and ABC as well as a guest act on the Masters of Illusion tour, Trino is a versatile entertainer who has helped produce a variety of performances and events from packed-out college shows and corporate events to private soirées and company parties. Whether performing at a theme-park, university, Fortune 500 company, mega-church, or theatre, Trino captivates his audiences in a way that leaves them wonderfully entertained and elegantly enthralled. Thanks to his combination of skill and quick wit, Trino has been privileged to perform for celebrities such as Gene Simmons (KISS), Lee Brice (Billboard Chart Topping Country Artist), Kevin Nealon (SNL, Weeds) and many others.

Jonathon LaChance is “not-your-father's-magician”, his Impossible magic side-splitting comedy, and audience involvement is PURE entertainment! Among his performing credits, Jonathon LaChance made magic history on the number one magic television show Penn & Teller: Fool US. His magical talents have also been seen on numerous national tv programs including the NBC Today Show, ABC, and PBS. Headlining theaters and resorts across the country with his one-man magic show called Laugh Magic LIVE! He was the winner of the Magic Close-up Classic in the Magic Capital of the World. Often Invited back by event organizers year after year, it is no surprise that Jonathon was voted “BEST magician of his family” (2 years running…). For the past several years the Magic of Jonathon LaChance has toured the country, showcasing his youthful-charm, illusions, and comedy magic.