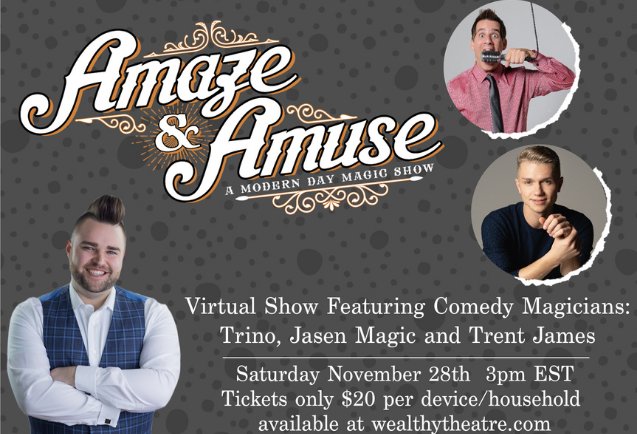 Amaze & Amuse is a modern day magic show that features comedy, mind blowing magic and special guest performers. Typically, the show is held in the intimate 60 seat Koning Micro Cinema at Wealthy Theatre but has gone virtual for a special performance at 3pm EST on Saturday, November 28th. Amaze & Amuse is the perfect family event, date, or get-together with friends!  The show will feature comedy magician Trino with special guests Jasen Magic and Trent James. Limited tickets are available at wealthytheatre.org.

$20 - General Admission for one device **Watch Party Packs must be picked up from Wealthy Theatre on Saturday, November 28th between 11:00am-1:00pm

Please note: Online access link will be sent to the provided email the day before the performance

Trino commingles comedy and theatrical feats alongside a backdrop of popular music, presenting an energetic and thoroughly modern take on the ancient art of illusion. At once cheeky and charming, the finely coiffed Trino creatively interweaves audience participation with stand alone stunts that wow and woo audiences of all ages. As seen on Fox, The Verge, CW Network and ABC as well as a guest act on the Masters of Illusion tour, Trino is a versatile entertainer who has had his hands in wide ranging productions from the college circuit and corporate events to private soirées and company parties.

Jasen Magic has been televised in nearly 40 countries. He’s been featured on ABC, FOX, The Discovery Channel, The History Channel and is a regular on Detroit’s own Live in the D on NBC. When he is not performing aboard Royal Caribbean Cruise Lines he appears annually at hundreds of events around The US, Canada and Mexico. He has been invited to perform for the likes of Tiger Woods, Mario Andretti, Robin Leach and most currently for The Rolling Stones.

Trent James brings a fresh feel to the classic magic show. Trent combines mindboggling magic and offbeat comedy for a new generation. He is the winner of over twenty awards, including The Society of American Magicians International Stage Contest- People’s Choice Winner, International Brotherhood of Magicians Stage Contest-Silver Medal, and was named The Most Promising Young Magician by the Milbourne Christopher Foundation. At the age of only 23, Trent has already performed at The Magic Castle, headlined on luxury cruise ships, and tours colleges with his show Pure Lies.