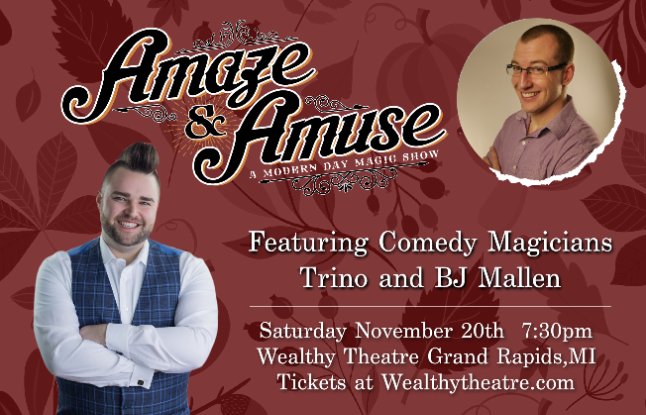 Trino- Having grown up just an hour from "The Magic Capital of the World” (Colon, MI), Trino learned the art from top professionals that helped him quickly grow into a seasoned performer and entertainer. For 14 years (over half his life) Trino has loved bringing laughter, amazement, and high-quality entertainment to audiences of all ages. Now based in Grand Rapids, Michigan, you can find him entertaining at various events and traveling the country with his wife, Ashley, and their hairless cat, Cannoli. As seen on Fox, The Verge, CW Network, and ABC as well as a guest act on the Masters of Illusion tour, Trino is a versatile entertainer who has helped produce a variety of performances and events from packed-out college shows and corporate events to private soirées and company parties. Whether performing at a theme-park, university, Fortune 500 company, mega-church, or theatre, Trino captivates his audiences in a way that leaves them wonderfully entertained and elegantly enthralled. Thanks to his combination of skill and quick wit, Trino has been privileged to perform for celebrities such as Gene Simmons (KISS), Lee Brice (Billboard Chart Topping Country Artist), Kevin Nealon (SNL, Weeds) and many others. You can catch Trino on the CW Network for the upcoming season of Masters of Illusion!

BJ Mallen- BJ Mallen’s razor sharp wit and improvisation skills make every performance a one of a kind experience. Fate having conspired to bring the young magic enthusiast’s family to the “Magic Capital of the World”, Colon, Michigan as a child- BJ was blessed to befriend and learn from some of the best working pros in the business. Colon is still his home when he’s not traveling the country performing. He’s been on television programs around the world, including NBC’s The Today Show. Charming, funny, and magical, BJ wins the hearts of audiences with ease. You’ll be left laughing and feeling great after enjoying your time with BJ Mallen.