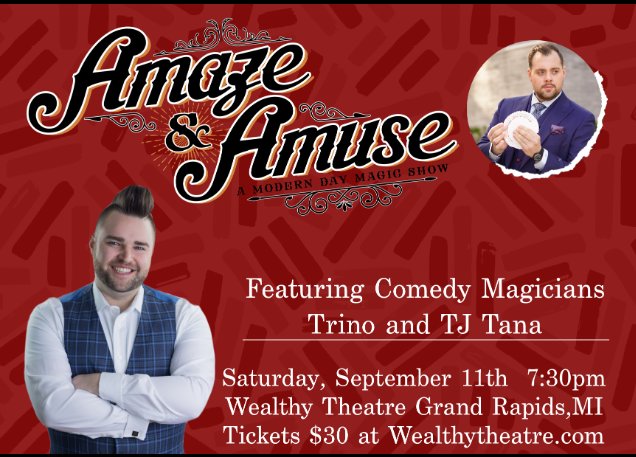 Tickets are $30 (and include 1 drink ticket: good for a beer/wine/soda)

​For 14 years (over half his life) Trino has loved bringing laughter, amazement, and high-quality entertainment to audiences of all ages. Now based in Grand Rapids, Michigan, you can find him entertaining at various events and traveling the country with his wife, Ashley, and their hairless cat, Cannoli.

Thanks to his combination of skill and quick wit, Trino has been privileged to perform for celebrities such as Gene Simmons (KISS), Lee Brice (Billboard Chart Topping Country Artist), Kevin Nealon (SNL, Weeds) and many others.

TJ Tana- Whether it’s up close or on stage, TJ’s mind-blowing illusions collide with his electric personality and hysterical antics, making for a truly unforgettable experience. At only 18 years old, TJ was one of the youngest ever performers to grace the grand stages of Las Vegas at the Planet Hollywood Resort and Casino. By 23, TJ's performance's have been seen in over 8 countries and 3 continents. TJ is known for his performances on the Masters of illusion LIVE tour and his behind the scenes work with the touring cast of "The Illusionists, Turn of the Century" working in such esteemed venues such as the Dubai World Trade Center and the Sydney Opera House. Famous comedian Gilbert Gottfried calls TJ's magic "Amazing!".