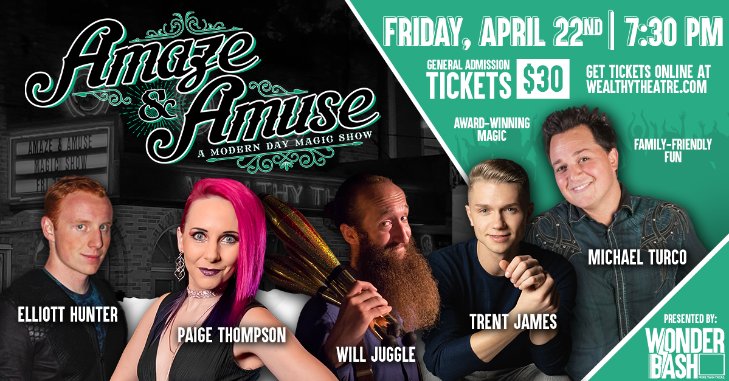 Amaze & Amuse is taking over Wealthy Theatre with our biggest show yet! This all-star lineup of the top magicians from around the country is sure to blow minds, drop jaws and leave you laughing long after the show is over. These performers have been seen headlining cruise ships, theatres and casinos around the world and on TV shows including America’s Got Talent and Masters of Illusion. The show features Michael Turco, Paige Thompson , Trent James, Elliott Hunter and Will Juggle. You don’t want to miss this family friendly show at Wealthy Theatre!

VIP Tickets- $60 and include 1 drink ticket (good for a beer/wine/soda), a deck of cards and guaranteed front center seating. These tickets are extremely limited.

Michael Turco- Michael Turco fell in love with the mystery of magic when he was just 5 years old. Spending his summers just miles from the strip in Atlantic City, he saw every magic show in the area and was intent to master each trick and illusion on his own. It was not long until he had his own acclaimed show, Wonder, premiering at Bally’s in Atlantic City and he has been performing at the highest level ever since. Turco made his national television debut in 2011 on NBC’s America’s Got Talent and since then has been featured on Entertainment Tonight, Hallmark Channel’s Home and Family, The CW’s Hollywood Christmas Parade, REELZ’s Extreme Escapes, Pop TV’s Don’t Blink, the international series La Grande Magia, and more. Outside of television, Turco headlined his own show at Planet Hollywood Resort & Casino in Las Vegas, where he brought a little bit of Jersey flare to the strip. He created new illusions specifically for that stage and collaborated with Dancing with the Stars pro Lacey Schwimmer to bring cutting edge choreography to the show, setting the bar high for the type of experience fans have come to love. The press describes him as “a natural born talent... a true success story,” and he does not plan on stopping any time soon. He can currently be seen in the live tour of Masters of Illusion, the international stage show, which he has been apart of for 8 years. Likewise, he has been a featured performer on the CW’s television version of show, now going into its eighth season. When he’s not touring, Turco and his team produce a series of shows for theme parks across the US. Almost four years ago, he was diagnosed with Acute Lymphoblastic Leukemia and is currently working with The Leukemia & Lymphoma Society on brining awareness and fundraising for a cure.

Paige Thompson- Currently living in Chicago, Paige Thompson has become one of the Resident house magicians of the Chicago Magic Lounge. A long time dream was recently fulfilled as she appeared for the first time in the close-up gallery at the internationally acclaimed Magic Castle, in Hollywood California. Paige was a featured contestant on FOX’s Showtime at the Apollo, and last summer made her debut on the CW’s hit show Masters of Illusion.

Trent James- Trent James is bringing a fresh feel to the classic magic show. Trent’s high-energy performance combines mind-boggling magic with gut busting humor, earning rave reviews in over thirty states. Trent is quickly becoming one of the top magicians in the country, having received over a dozen high honor awards, as well as being the youngest recipient of The Milbourne Christopher Award (Past winners include David Copperfield and Penn & Teller). Trent’s unique sleight of hand magic has taken him across the country performing at theaters and across the globe sailing on luxury cruise ships.

Elliott Hunter- He is named as one of the top young magicians in the world working today. At just 23 years old, Elliott Hunter has already headlined nightclubs in Las Vegas, created his own touring show, and become a regular performer in the Palace of Mystery at Hollywood’s famed Magic Castle. Most recently, he was named the 2021 Abbotts Magic Champion for performance excellence.

With the goal of using magic to create a sense of community, Elliott’s dynamic show has been featured with companies, theaters and colleges over the world.

By combining sleight of hand with his background in engineering, intimate storytelling and competitive endurance sports; all facets of entertainment converge to create an experience more unique than Elliott’s ginger genetics!

Will Juggle- As a plucky schoolboy with a burning desire to entertain, Will began honing his performance skills. Tiring of his day job, by age 10, he began impressing crowds on nights and weekends as his mother chauffeured him around the suburbs of Chicago. He has since opened for the Presidents of the United States of America, charmed hordes of Harley riders, enchanted university students, and entertained at corporate events across the nation. His relentless devotion to his craft has left him with amazing skills and very few friends. You will laugh at his unique brand of humor, and become filled with awestruck wonderment at his champion juggling skills and award-winning beard.